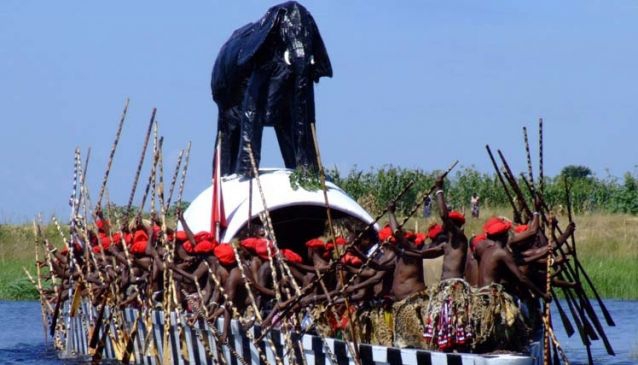 The traditional ceremony of the Barotse people of the Western Province in Zambia, Kuomboka means 'to get out of water', celebrating the move of the Litunga, king of the Barotse, from his compound at Lealui in the Barotse Floodplain of the Zambezi River to Limulunga on higher ground.

The Barotse include a large number of tribes in Western and North Western Zambia.

The Zambezi River in the Western Province flows through the wide, sandy, Barotse flood plain with the villagers living along its banks fishing, growing crops and tending their cattle.  In January the waters start rising, slowly slowly, spreading out.  By February the river is starting to resemble a huge lake, the villages are on built up mounds, suuba, to keep them out of the early flood waters. March and the water has risen even further and the rats, snakes, ants and other animals move on to what little high ground there is.  The Ngambela, prime minister and official mouthpiece of the Litunga, announces when the Kuomboka will take place after the first sighting of the new moon.  No villager may leave for higher ground before the Litunga does.

The annual ceremony is thought to go back to 1500 and is steeped in legend and tradition. The day before the official move the drumming of the royal Maoma drums start.  The sound announces the start of the festival. The Litunga's barge, Nalikwanda which means 'for the people', is truly a craft of royal proportions with room for the Chief, his attendants, the royal musicians, and at least one hundred paddlers dressed in traditional animal skins and red berets.  The Nalikwanda is painted black and white with a shelter for the Litunga.  On top of the shelter is a large elephant, complete with ears that flap. A steady plume of smoke rises from the boat to indicate that the Litunga is alive and well.  The royal barge is guided by a couple of barges, painted white, which search out navigable channels. The Litunga's wife follows in a smaller barge, Mbolyanga, with a cattle egret mounted on the shelter.  The egret's wings also flap.  Three of eleven drums beat for the entire 6 to 8 hour journey.  The two royal barges are followed by a huge flotilla of craft, large and small, loaded up with the villagers possessions.

The Barotse regard themselves as a separate nation in many respects and even have their own flag.  Their traditional dress is very different to any other in Zambia.  The women wear a musisi, a large, quite full skirt with an internal frame to help retain its shape.  The men wear a siziba, a similar skirt with a matching waistcoat and cotton beret.  When the Litunga boards the barge he usually wears a siziba but when he disembarks he has changed into a uniform of dark blue with ornate gold braid and cockade hat.  The uniform was a gift to the Lewanika when he attended King Edward VII of England's coronation and each successive Litunga has a uniform tailored in the UK.

The Kuomboka attracts a huge number of visitors, trips and specials are usually organised by travel companies although a self-drive is possible.  Accommodation can be basic and quite pricey for what you get.